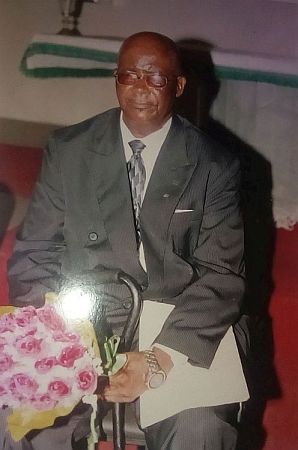 This is to announce the death of Mr. Samuel S. Allison Sr., former employee and manager of the Firestone Plantations Company and Soul Clinic Community respectively.

He died from a brief illness at the Duside Hospital, Firestone Plantations Company at age 78. He died at 12:20 AM on November 23, 2017. He leaves to mourn his passing his wife, Mrs. Martha B. Allison, four sisters, ten children, 28 grandchildren, and 19 great grandchildren and other members of the family and friends.

The next family meeting is scheduled for the 10th of December, 2017 at the residence of the deceased in the Soul Clinic Community.

Interment will be at Kaiser Memorial Lawn Cemetery, Brewerville, Monteserrado County on December 15, 2017.

Funeral arrangements and wake keeping will be announced later.

This announcement was brought in by Mr. Prince S. Allison, Mr. Melvin Allison, and his wife Mrs. Martha B. Allison (widow) on behalf of the family