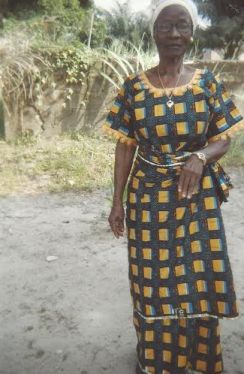 At the age of 20, Gboryonnoh married George Gbarwea. The union that was blessed with two daughters and a son. The union ended in divorce, and then she married Quenwon Bestman. That union also produced a daughter and a son.

The children grew up and left the nest, and Gboryonnoh devoted her life to the Lord in her local church where she became a member of the choir.

In January 1989, she went to visit her children in America. She returned home in early December that year when the Civil War broke out. On Christmas Eve she fled to the refugee camp in Freetown, Sierra Leone, and then to another refugee camp in Macenta, Guinea. After a year in the Macenta Refugee Camp, she went back to America and lived there for six years.

As it was her first time being away from home for so long, Gboruonnoh became homesick and wanted to come to Monrovia, in spite of the war. In 2002, as the second civil war raged on, she told her children that she wanted to get back to Monrovia. "The war will not kill me because I believe in the Lord. He is my savior," she said. Gboryonnoh came back to Monrovia in early 2002, and until passing last month, she was the happiest mother and grandmother.

She leaves to celebrate her life and cherish her memories two sisters, Watchin and Fussy Tiankpa, a brother named Wee Tiankpa, two daughters, Betty Gbarwea Roberts and Julia Gbarwea Fletcher, and son Major Bestman, son-in-law Kaba Sheriff, thirteen grandchildren and nine great grandchildren, and a host of friends, nephews, nieces, and cousins including Jakpawulu and others.