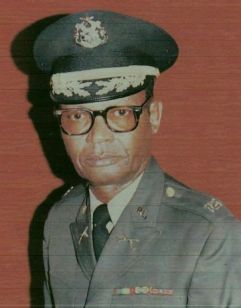 The Davis, Trinity, Dennis and Fahnbelleh families are saddened to announce the peaceful homegoing in his 85th year, of Col. Frederick Wellington Davis, Sr. (Ret. AFL). This demise occurred at the St. Joseph Catholic Hospital on Monday, October 24, 2011 at 7 o'clock in the morning in Monrovia, Liberia.

He was a loving husband, an admired father to all, a man of wisdom, a man of discipline. Significantly the late Col. Davies will be remembered for his designed of new military insignias giving Liberia its own identity insignias for the Liberian Military.

On Friday November 11, at 5:00 PM, the body will be removed from Samuel Stryker Funeral Home in Monrovia and taken to the Trinity Cathedral Episcopal Church on Broad Street, for one night of wake keeping.

On Saturday, November 12, at 10:00 AM the funeral Service will be held at the same church. Interment will follow at the Kaiser Memorial Lawn Cemetery, Brewerville, Liberia, in plot #1080.