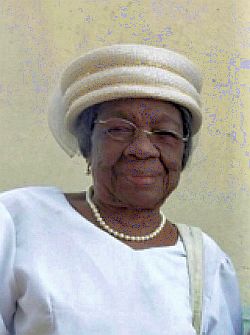 The Deshield, Benson, Braithwaite, Eastman and Wright families announce with Blessed Assurance the homegoing of Mrs. Mai Benson Deshield, which event occurred on August 18, 2018 in her 92nd year.

She is survived by her children Joanne Deshield Bright; John R. Deshield, Jr. (Cynthia); Hawa Dennis; Angeline Hunter (Thomas); and James Gbollie (Grace); and her several grand and great-grandchildren. She is further survived by her sisters, Enid Benson, Ellen Brown, Shirley Henries, and Nellie Sidifall (Reuben), in addition to many cousins, nieces, nephews, other relatives in the Deshield, Benson, Braithwaite, Eastman and Wright families, many friends, and the members of First United Methodist Church, Monrovia, Liberia where she was a member for nearly 70 years, and an ordained Deaconess.

In addition to her many years of service to her church, Deaconess Deshield was an active member of the Order of Eastern Star. She retired from the Liberian government after many of service at the Department of Education, and subsequently the Ministry of Education.

May She Rest in Peace and May Light Perpetual Shine Upon Her. Amen.