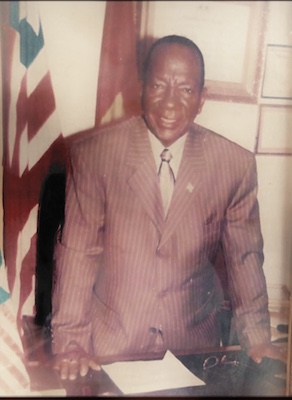 “I have fought the good fight, I have finished the race, I have kept the faith." 2 Timothy 4:7

The E. Sumo Jones family announce with profound sadness the passing of our beloved father, grandfather, uncle, cousin, friend and family patriarch, Edward Sumo Jones Sr., Ambassador-in-Waiting. On January 29, 2022, Papa, as he was dotingly called, peacefully transitioned after a very brief period of illness at the residence of his daughter in Brooklyn Park, Minnesota, USA.

Papa was born to the union of Kazeleebah and Krubo Qua Qua in Kiliwu, Zorzor District, Lofa County, Liberia. Papa cherished his family and the people of Lofa County. He also loved and served his country, Liberia with pride. Papa was a brilliant scholar, politician, and public servant. He served in the presidential administrations of Dr. William V. S. Tubman, Dr. William R Tolbert, Dr. Samuel Kanyon Doe, and Dr. Ellen Johnson Sirleaf. Most notable positions were, Commissioner of Immigration & Naturalization Services, Superintendent of Lofa County, Minister of Commerce & Transportation, Minister of Labor, Deputy Minister of Foreign Affairs, Managing Director National Port Authority, Senator of Lofa County, and Ambassador to Guinea. In addition to the many positions he held, in the government of Liberia, Papa diligently served in the private sector and was a member of various professional organizations and clubs including The American Society of Criminology, The World Police Congress, The International Association of Police, The American Biographical Research Institute, Lofa County Association, and Crowd 18. Papa also dabbled in the literary world by authoring the book, Courts and Trials in the Republic of Liberia, As Related to Law Enforcement and the Treatment of Criminals. He cherished his relationship with the late President Tubman and credits him for his public servant successes. He graduated from the University of Liberia, earned his Master of Science from the Michigan State University, and an Honorary Doctorate of Humanities from Philathea College, London, Ontario.

Papa was married to Lovest Elizabeth George. He is survived by his children, Edna, Eula, Musu, Sumo Jr, Esther, Esther (Bill), Lydia (Chippy), Suan (Emmett), Ellen, Gloria (Leroy), Alvin, Sonie, Zayzay, Alsu, Feta, Florence, his grandchildren and great grandchildren, his nieces and nephews and a host of other relatives and close friends. He was predeceased by three children, Tony, Kazeleebah/Papi and Juanita, and his beloved brothers, Henry, Ernest, Elijah, and Larry.

Papa, your work on earth is done. May God grant you eternal rest. We will love you always.

Papa will be laid to rest in his beloved, Liberia. The Funeral Arrangements for Ambassador Edward Sumo Jones, Sr. are as follows:

If you are interested in paying tribute, please reach out to one of the contacts listed.