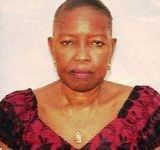 The death is announced of Mother Patricia Musu Gaye Ezeagu which took place in Lagos, Nigeria, West Africa on October 20, 2012 at 6:00 PM.

On Wednesday November 21st the body will arrive at the Roberts International Airport and be taken to the Samuel Stryker Funeral Parlor.

On Friday November 23rd there will be a silent wake keeping at the home of her niece Ms. Pendora Okotie in Paynesville, Liberia starting at 9:00 PM.

On Saturday November 24th the body will be removed from the Samuel Stryker Funeral Home and taken to the Tubman Memorial United Methododist Church, Weaver Street, Paynesville for funeral rites starting at 10:00 AM.

This announcement was brought in by her children Mercy and Gerogetta Gaye-Ezeagu on behalf of the family.