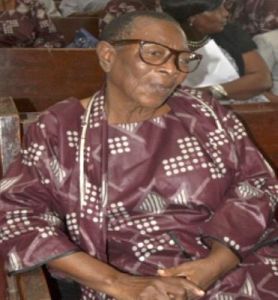 Dear Lord, if indeed I am Thine, if Thou art my sun and my song, Say, why do I languish and pine, and why are my winters so long? Oh, drive these dark clouds from my sky; Thy soul cheering presence Restore; or take me unto Thee on high, where winters and clouds are no more.

The Howe and all related Families announce with profound sadness, the death in her 87th Year of Hon. Sally Hne Howe, former member of the House of Representatives for Maryland County (1971-1980). This sad event occurred peacefully at her Outland Community home, Paynesville City, Liberia. She was born on April 6, 1929 in Springhill, Harper City, Maryland County to the blessed union of Hon. John Gyude Howe and Mrs. Lue Klanneh Scott Howe.

The late Hon. Sally Hne Howe was a devout Christian, and an Episcopalian from Annunciation Church in Springhill, Maryland County. She later transferred her membership to the St. Stephenĺs Episcopal Church in Sinkor, Monrovia, where she served as Usher up to the time of her death. She was also a faithful and dedicated member of the Episcopal Church Women of Liberia.

Ma Dear, Aunty Sally, Weesue, Civilized Girl, and in the many ways we all called her was the unifying tree of the Howe Family and Descendants. Her frankness, love, and jokes will be missed by all. She lived well in her community as an Elder, a pillar of wisdom, and a mother to all.

In fulfillment of her Wishes, there will be no tributes or floral designs at her wake and funeral, and all cash donations will go towards holding her ôGrebo People Traditional Feastö. All family members, relatives, and friends wishing to make cash donations can do so through:

Friday, July 15, 2016 at 5:00 pm ľ Removal of the Body from the Samuel A. Stryker Funeral Home to the St. Stephenĺs Episcopal Church, 10th Street Sinkor, for a Wake of inspirational Songs and Scriptures only; No Tributes or flowers!

This announcement was brought in by her family.