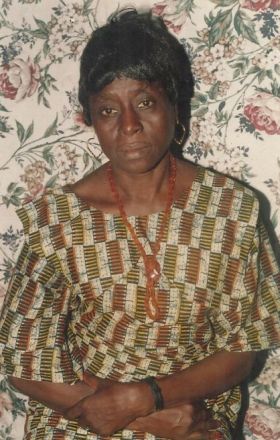 The death is announced of Alice K. Kollie of Logan Town, Babylon, SDA Community. This sad event occurred on October 16, 2013 at th Redemption Hospital after a brief illness.

She was born on December 15, 1948 unto the union of Forkpa Kollie and Ma Sonie Dawleh, who both pre deceased her, in Harbel, Firestone . She is survived by three children, Emil Fahme of Lebanon, Erick Fahme, commonly called Erick Safari, and Florence Sorboh, one sister, Esther S. Kollie, one uncle, Baymond Zarbay Sr., ten grandchildren, one great grandchild and a host of relatives and friends in Lofa County, Monrovia and abroad.

Thursday, October 31, 2013, there will be a quiet hour at the St. Moses Funeral Parlor from 6 PM until 7 PM. The body will then be removed from there at 8 AM and taken to the James R. Davies Baptist Church, opposite the LPRC office on Freeport Road.

Wake keeping will begin at 10 AM and the funeral service starts at 11 AM.

This announcement was brought in by Erick S. Fahme for the family.