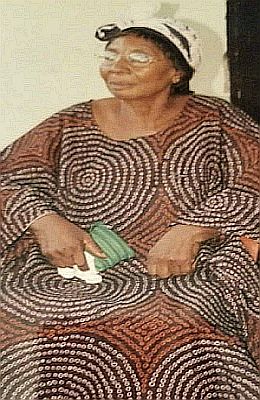 The Nyeplu, Sayeh, Williams and Nimene families regret to announce the sudden death of their mother, grand and great grandmother, auntie, cousin, and friend mother Grace T. Nyeplu. This sad event occurred after a brief illness on Monday June 28th.

The late Grace T. Nyeplu was not only a mother to her biological Children but to many others including Rebecca_Wisseh Troh, Helen Johnson (Sieh-Mahdee), Nancy and Patrick Dorsla Sonpo- Mahdee a host of other relatives and friends in Liberia especially Old Matadi Estate and around the world.

Sista, was predeceased by her parents the late Reverend DD and Elsie Gmsonoh Nyeplu, her brother Cllr. Isaac C. Nyeplu I., her daughter Patricia Nimene-Monger and her Neice Oretha B. Nyeplu.

The Late Grace T. Nyeplu worked as a nurse at the J.J. Dossen Memorial Hospital in Harper City, Maryland County for 28 years before her early retirement in 1984 due to injury on the job. She was a devout Methodist and affiliated with the Stephen Trowen UMC on 13th Street Sinkor and the Doe Juah UMC respectively.

“oh Thou In whose Presence my soul takes delight. On whom in affliction I call. My comfort by day and my song in the night. My hope my salvation and my all.” Because of the comfort we have in Jesus, we hope to see you some day. Therefore, we weep not. Love you mama.

Our beloved mother will be removed from the Samuel Striker Funeral Parlor on Friday July 9th after a brief service and will be interred at the Kaiser Memorial Lawn Cemetery in Brewersville, Montserrado County.

This announcement was brought in by her daughter Jacqueline Williams USA.