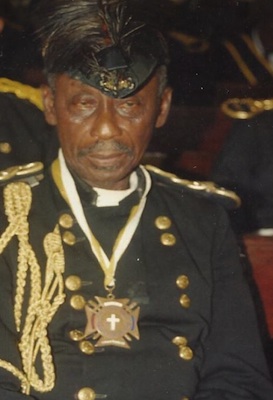 J. Emmanuel Pepple was commonly known by his family and friends as OP, Modu and Brigadier General, as he was the District Commander of the Liberia Grand Commandery, Knights of St. John International, for more than 20 years, with that rank. He was also a retired Lieutenant Colonel of the Armed Forces of Liberia and retired Director of Physical Education of the Ministry of Education, where he worked for more than 50 years. He was conferred the Distinction of Knight Commander in the Humane Order of African Redemption on July 24, 2007. He was also the Proprietor of the Ojuís Restaurant on Crown Hill, Monrovia.
Cherishing the memory of his love, his constant support, and his gentle guidance are his wife for more than 52 years, Myrtle Diggs Pepple, sons ñ Oliver and Oju (Jartu); brother, Anthony; three sisters, Theresa, Sarah and Rose; several grandchildren, great grandchildren, nieces, nephews, cousins and many friends in Liberia and abroad. His daughter (Valarie) and son (Ernest) predeceased him.

Funeral Arrangements
His remains will be removed from the St. Moses Funeral Parlour, on Somalia Drive, on Friday, October 11, 2013 at 7: 30 a.m. and taken to the Sacred Heart Cathedral on Broad Street, Monrovia, Liberia, for wake keeping. Sympathizers wishing to pay tribute are requested to do so during the wake keeping as only the Ministry of Education, Knights of St. John International, Family, Church and State will pay tribute during the Funeral Service.

The Mass of the Resurrection will commence immediately after the wake keeping at the same Church, to be followed by interment at the Kaiser Memorial Lawn Cementry in Brewerville, Montserrado County.
May his soul and the souls of all the faithful departed rest in peace.