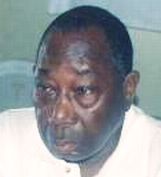 The family of Moulai Reeves announces his death which sadly occurred on April 9, 2011 at the JFK Hospital, Monrovia, Liberia.

The body will be removed from Samual Styker Furenal Home on Wednesday April 20, 2011 at 5:30 P.M. to the Effort Baptist Church in Payneville. Wake keeping will be from 6 P.M. until 9 P.M.

The funeral service will be at 9:30 A. M. on Thursday April 21 at Effort Baptist Church, Paynesville, Liberia.