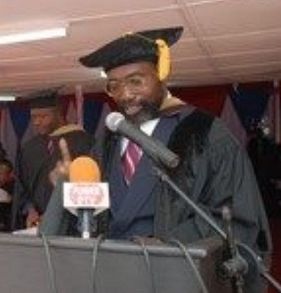 This sad event occurred at his residence on December 5, 2018, after a protracted period of illness. Funeral arrangements for the peaceful home going of the late Dr. Dominic Nmah Tarpeh are as follows:

On Saturday December 15, the body of the late Dr. Tarpeh will be removed from the Samuel A. Stryker Funeral Parlor in Sinkor at 08:00 am and taken to the Capitol Hill Campus of the University of Liberia, where he will be Laid-in-State for one hour beginning at 09:00am.

At 10:00am, his remains will then be taken to Our Lady of Lebanon Catholic Church, St. Joseph Parish on Capitol Hill for an hour of Wake-keeping to be followed by the Mass of Resurrection beginning at 10:30am.

Except for the Government of Liberia, University of Liberia, Family and the Church, all tributes, including that of government institutions, will be paid at the wake keeping.

The late Dr. Dominic Nmah Tarpeh is mourned by his wife, Verda Tarpeh, son Dominic Jr., daughters Dwede and Tele, one granddaughter and a host of family and friends.

Meanwhile, the final meeting of family and friends will be held on Wednesday December 12 at 5:30 pm at the home of the deceased on the Oldest Congo Town Backroad.