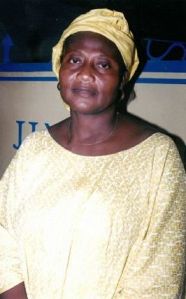 This is the announcement of the death of Etta Weananyon Bo Scere.

This most sad loss took place at her home in Gaye Town, Monrovia, Montserrado Co., Liberia on December 15, 2013.

She is survived by her children, 11 grandchildren, one great grandchild, aunts, several brothers, sisters, cousins and a host of other relatives.

The body will be removed from the Samual A. Stryker Funeral Home at 9 AM and taken to the Trimity Catheral Episcopal Church on Broad Steet for funeral rites on January 10, 2014.