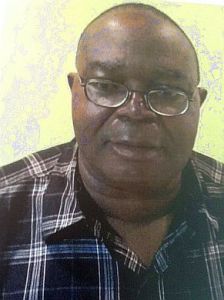 This is to announce the death of Robertson Jarsiah Weedor. This said event occurred on the 4th of November at the J. F. Kennedy Hospital.

The late R. Jarsiah Weedor last worked as an instructor at the Agriculture College, University of Liberia, Fendell Branch.

He is survived by his one daughter, seven sons, several grandchildren, sisters, brothers, nieces, nephews, uncles and other relatives and friends including his wife Agatha Weedor.

There will be a silent wake keeping on the 20th of November, 2015 at his home on 72nd Blvd. The funeral of the late R. Jarsiah Weedor is on November 21, 2015. Removal is at 9:00 AM from the Samuel A. Stryker Funeral Parlor on November 21st and taken to the Mount Zion New Life Apostolic Church, 72nd Blvd.

This announcement was brought in by Elder Richard S. Kollie and J. Wollo Yarsiah on behalf of the family.