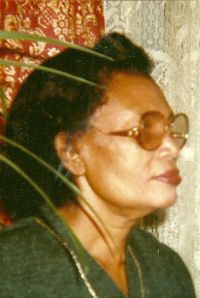 The body of the late H. Alice Railey Cisco will exhumed and transferred to Kaiser Memorial Lawn Cemetery in February 2011. She was the oldest daughter of the late Col. James A. Railey and one of the first six nurses of Liberia, Henerietta Diggs Williams Bangura.

She taught at the Liberian College, now the College of West Africa, St. Teresa Convent, B.W. Harris High School, Monrovia Demonstration Elementary School, and McIntosh Elementary School. She was well loved by all of her students. Her nickname was Cousin Alice.

The bodies of her late mother Henreitta Diggs-Williams-Bangura, her late husband Counselor William A. Cisco Sr., and her late daughter, H. Marie Darlene Cisco-Bemah will be exhumed and transfer a week before her body is.

This announcement goes out to all of her family and friends.

From her Children: H. Carey Thomas, William Spencer Cisco, William Alexander Railey-Cisco, all of the USA, and William Anthonnie Cisco Jr. of Liberia. Her two daughters, Wilhenmina Lenecia Cisco and H. Marie Darlene Cisco-Bemah preceded her in death, and her son, Tyrentheus F. Cisco Sr. passed away in 1999.

Further announcement will be given on TLC Africa later.

Here is a fine tribute to his dear late mother written by Tony.